“at Altendorf we are here for the customer”

“It’s not easy to pin Vit Kafka down but Supplier’s Phil Ashley ‘caught up’ with Vit recently for a chat about the new Altendorf Group.”

Vit Kafka has been with Altendorf Australia since 1995 first as Sales Manager, then General Manager and for the last six years, Managing Director. His master’s in business administration ideally positions him for a career in sales where a scientific approach to management is required. Not only is Vit one of the busiest Managing Directors in Australia, his responsibilities as Director Sales Centre East (China, India, Japan, Korea, SEA, GCC and other countries) for the Altendorf Group see him away from home up to four months a year so it was fantastic to finally pin him down and ask a few questions about the new Altendorf Group. 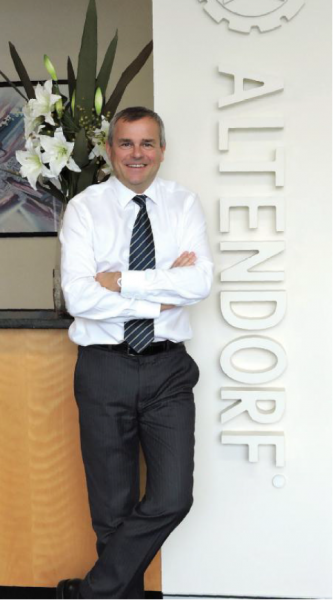 Altendorf has undergone a few changes over the last few years starting with the sale of the family business to Avedon Capital Partners in October 2017. The momentum was immediate and within six months Avedon had acquired Hebrock of Bünde, North Rhine-Westphalia; a company producing edge banders and located in the same region as Altendorf. Founder Horst Hebrock said “We have had friendly relations with Altendorf Group for many years and know that growth orientation is the right way to meet the challenges of the future.” Joerg F. Mayer, Director of Altendorf Group, added “As Altendorf Group, we aim to offer premium machinery for the craftsmen in panel-based furniture manufacturing. Hebrock edge banders are among the leading brands in the segment, and we see the greatest potential for synergies in respect of procurement, sales and marketing.”

After the acquisition of the Altendorf company in 2017, the investor Avedon together with the management team devised a concept that shows how they would position the company in the future. The Altendorf Group would become a supplier of high-quality machines for the international craft businesses in the field of panel-based furniture manufacturing. In addition to the classical sliding table saw two additional categories of machines are planned, the Altendorf Group will become partner of the handcraft sector in the areas of cutting, edging and CNC boring. The first stage of acquiring a quality edge bander has been achieved and Joerg F. Mayer volunteered to Supplier magazine that the next acquisition would be a company producing CNC routing and boring machines. It is believed that an announcement is only a few short months away and Supplier Magazine believes there is a possibility that a new machine type in the Altendorf Group could be revealed at the Ligna fair in May.

Altendorf is now known as Altendorf Group, not in line with other companies being renamed ‘Groups’ but to reflect the fact that the company is growing, and they are now much more than a panel saw manufacturer. They are of course the maker of the original saw over 100 years ago and have maintained a level of quality that has led to a loyal following for well over a century. Altendorf now have 200,000 machines installed in 120 countries and Vit assures me “Avedon brings a new experience; expertise and synergy to the company. Altendorf has always been an international company but Avedon will take us to new levels. The move in America from Stiles Machinery as a single dealer to Altendorf Group America early this year is only one example of where the group is heading. We now have our own organisation and management in the huge American market.” At a press briefing for Journalists early February this year in Hannover, the catchphrase “Growing Together Worldwide” was released by Altendorf Group to reflect the direction the company is heading, and this will likely be displayed at Ligna.

In Australia Vit reports that Altendorf Group is also doing exceptionally well. The challenges faced from cheaper equipment are still there but Vit says “In all of our previous five years we have set new sales records. This is not only about one or two extra machines a year, but we are achieving a dramatic difference in machines sold. In fact, over 45% of the machines we sell are going to manufacturers who previously have owned a cheaper machine.” Of the change to Altendorf Group with multiple machine types, Vit said “Our customers were coming to us and asking why we couldn’t provide other equipment. Now our acquisition of complimentary machine types will allow us to provide all the equipment our customers need. At Altendorf we know who our customers are. We are not trying to be the biggest supplier, what we are trying to do is to provide the right equipment they need.”

“At AWISA in Sydney we ran with the catchphrase ‘Perfect Cut and Perfect Edge’ and any new machine in the group will reflect that philosophy. Altendorf Group doesn’t identify as a supplier to mass-production manufacturers although we certainly sell a lot of machines in that area. We identify as a supplier to the crafts trades; companies with between one and fifty employees; it’s our core sector of the industry” said Vit. He adds that Altendorf Group has been adopting software solutions for several years and the ‘Magis’ program is an example of a solution that will enhance to performance of the simplest Altendorf saw to the most industrial application. “Magis is a digital operator guidance system and optimiser that has become very popular in the USA; India and Asia and is seeing interest here in Australia too. It’s like having an iPad on your machine and doing away with pen and paper” he says. 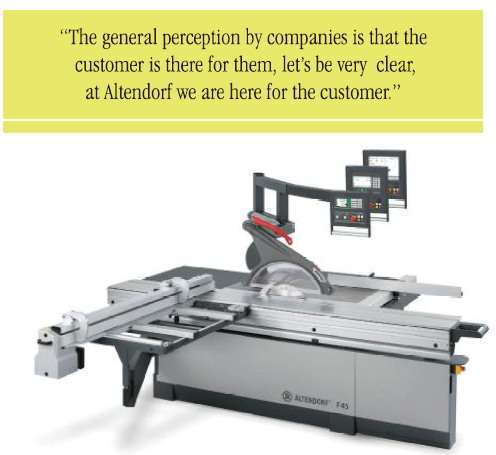 A further initiative of Altendorf Group is R+D to ensure that their machines are as safe to operate as they can possibly be. It would be a fair call to say the Altendorf saw is one of the safest machines available, especially if you consider the wide range of operating aids available. How the Altendorf boffins can improve an already exceptional machine is yet to be seen. Perhaps a safety saw stop could be on the cards; of curse we are guessing and only time will tell, the important aspect of this is that for Altendorf Group, continual improvement is the name of the game.

Nesting is a technology that took its toll on sawing machines in Australia, the UK and America especially. The new manufacturing model was marketed as using one machine where you used to use two or more, resulting in a saving in space and equipment costs in addition to labour, still one of the major costs of any manufacturing firm. The technology hit beam saws particularly hard and had some impact on sliding table saws, but not a lot. Vit strongly supports nesting as a breakthrough technology for the cabinet industry but sees that sometimes it could lock the manufacturer into a very regimented manufacturing routine that has an issue with flexibility. He said, “Maybe nesting was over-sold in some cases, but the industry is very mature, and the flexibility provided by a separate sawing machine is well understood.”

At the moment the past suppliers may continue to purchase Hebrock spare parts directly from Hebrock and this is done not to disadvantage any existing customers. The name will also stay but new buyers will notice ‘Altendorf Group’ under the Hebrock name. Retaining the Hebrock name is important because of the respect in which this machine is viewed. Any new machine type will be labelled the same way but Vit says “This may change in the future.” Vit also acknowledges that further machine acquisitions will occur, saying “I would be surprised if our next purchase is the last,” although he adds “We’re not about competing with everyone else, it’s the market Altendorf Group sees themselves excelling in and providing those customers with the equipment they need. The general perception by companies is that the customer is there for them, let’s be very clear, at Altendorf we are here for the customer.”